A Look at Some Common Household Spiders

While spiders are often given the reputation of one of the scarier types of pests, most kinds are actually not harmful to humans. They are pests nonetheless, though, and are commonly the reason homeowners call for residential pest control in Pleasanton, CA. Continue on for a look at some of the common types of household spiders. 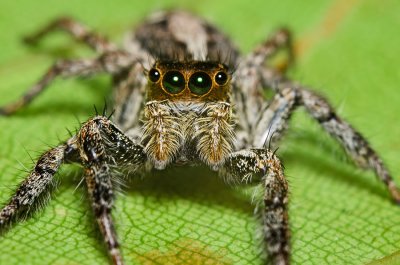 Jumping Spiders
Spiders are typically associated with the webs they create in order to trap their prey as well as increase their mobility. Jumping spiders, on the other hand, are named for the way that they jump around rather than traveling via web. They do not create any webs at all and instead follow their prey and use their jumping abilities to finally pounce on their targets. Jumping spiders are usually a metallic black. These types of spiders can also be identified by their three rows of eyes . Their first row is made up of four eyes, of which the middle two are the largest. Two small eyes make up the middle row, separating the first row from the dual medium sized eyes in the third row. They are active during the day and, partially due to the fact that they do not spin webs, hunt near ground level.

Funnel Weavers
Another type of spider that tends to warrant spider treatment calls to residential or commercial pest control companies is the funnel weaver. Also known as grass spiders, these pests get their name from the funnel webs that they create. Much like jumping spiders, funnel weavers also tend to hunt near to the ground. They are very patient pests; they spend much of their time waiting in the hole of their webs until they catch a victim. Their features vary, and they may have six or eight similarly sized eyes.

Garden Spiders
If you enjoy tending to a garden outside of your home, you may be calling an exterminator to deal with garden spiders. These arachnids may create webs in your garden, using your vegetation to shelter themselves as they wait for their prey. Species may be identified by pest control experts based on the designs of their webs.